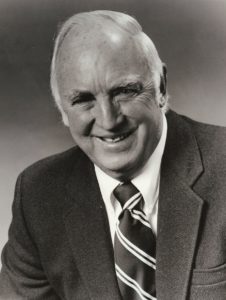 A Native of Wisconsin, Al attended Carroll College where he won 15 letters in Football, Wrestling and Track. He was an All American in Football in 1946; 1947 and 1948.

He moved from Lake Forest to Elmhurst College, where he was again the Head Football Coach and Head Track Coach along with his Head Wrestling Assignment. He has won over 100 dual meets while at Elmhurst with numerous, Conference individual champions. He has had 1 All American, who placed twice. Al has twice been named NAIA District Coach of the Year and has been President of the NCAA Division III twice – 1983 and again in 1984.

He has been involved with many facets of wrestling, but he is most proud of the fact that 10 of his form r wrestlers are now coaching at some level.

Al has also been involved in coaching other sports, among them: Women’s Tennis; and Cross Country. Many of these programs he started at the school he represented.

Carroll College elected him to their Hall of Fame in 1975.