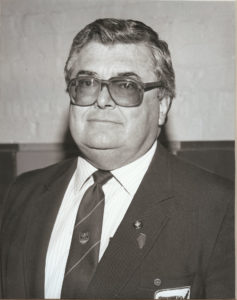 Al Lundy began his wrestling career at Rock Island High School. Upon graduation he entered the United States Navy where he became a member of the Great Lakes Wrestling team. He later was transferred to the New York Area where he became a member of the West Side YMCA in New York City. After leaving the Navy and returning home, Al immediately got involved with the Mayor Daley Wrestling Club and involvement that began in 1958 and continues to this day.

In the early days he helped coach the Hammond, Indiana YMCA club, a Greco Roman Team during the Illinois-Oregon Exchange schedule. He was involved in the Central AAU 1 s which was held at Garfield Park. He and his family conducted the South Suburban Freestyle Wrestling Champion ships at Thornton Fractional High School.

Al served as the director of the Mayor Daley Wrestling Club and for several years as Vice President. In 1975 Al was elected Secretary-Treasurer of the Illinois Wrestling Federation, a post he retains today.

He has been a Free-Style and Greco Official since 1968 and an IHSA Official since 1972, working a number of High School Regionals and Dual Meets. He has worked as a Bench Official at the Midlands 14 years and was honored with a special award for his services there.

For his work in the Illinois Wrestling Federation, Al was honored by having the annual award given to the Outstanding Freestyle Wrestler named after him The Al Lundy Award.

In 1986 Al was a representative of the IWE to the World Cup of Greco-Roman Wrestling Senior Level and he was also working in the same capacity at the 1983 Junior World Cup, both events held at Oak Lawn.