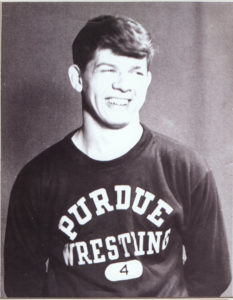 Al began his wrestling career at Chicago Vocational High School, which was not a member of the IHS A and therefore they could not compete in the State High School series. However Al in this period of time was undefeated in his last two years of high school and pin ned a 3rd place finisher in the State as a Junior and as a Senior he defeated a 2 time State champion 8-1. In duals, he pinned every opponent in his final two years of High School.

He assisted at Purdue, immediately following graduation, while working on his Master’s degree. When he finished he went to Chicago where he worked as a substitute teacher and for the Chicago Park District, eventually landing

a teaching job at Thornton Fractional North as a Biology teacher and Coach of Wrestling and cross country. This position he held until 1977 when he moved on to the Administrative level, first as a Director of Instruction; then assistant principal; principal; interim Superintendent and then for the final five years Superintendent of Thornton Fractional North, until retirement.

While still wrestling at Purdue, he competed against and won the Japan Olympic team. This was in 1951 and 1955.

His Coaching record at Thornton was over 250 dual wins; He had 12 State Qualifiers; 7 place winners and 3 Champions.

He is still working as an Educational consultant in the role of a Visiting Superintendent .