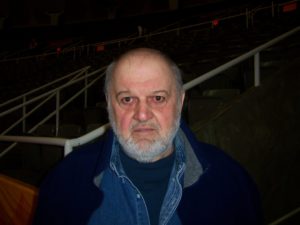 A veteran coach of thirty-five years, Alex Kristine coached a Barrington High School for twenty-nine years. During that period, his teams have won over 200 duals and qualified forty-four wrestlers for the state tournament. He has had sixteen place winners and four champions. Alex has also managed tournaments at several different levels. Barrington has been host to the I.HS.A. Individual Sectional many times and has also hosted several IBSA State Final Tournaments.