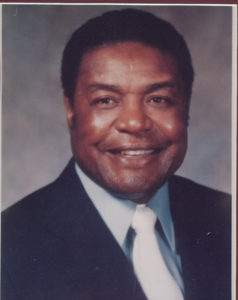 Mr. Jones had his beginning in Athletics at Lake Forest High School, where was a football player. He entered the University of Illinois where he played football.

Amos came to North Chicago in 1955, 25 years ago. Shortly after arriving on this campus he was initiated into the officiating fraternity by Bob Therry and Lou Slimmer and has been officiating the past 22 years. During this span of years, Amos has worked numerous High School and College duals, including the District, Sectionals and various Conference Tournaments. He has also worked the CCIW championships and the Mid-American Conference Championships, but above all Amos has been invited to work the State Championships of Illinois Series 6 times.

Amos has been involved in other capacities relating to wrestling: He has been a past office holder in the original coaches and officials association and has served on the State Football Advisory Committee for 3 years.

Mr. Jones has recently become involved more so with wrestling, this time as the Varsity Coach at North Chicago, along with his continuation of being the Varsity Football Coach and assisting in the Track program.