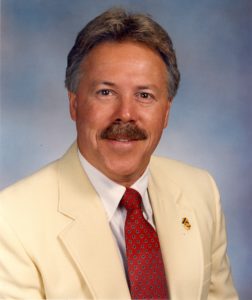 Arch began Wrestling at Elgin High School for Al Schaarf. His Collegiate days were spent at Valporiso College where he wrestled for 1 year. He finished his collegiate days at Northern Illinois University for Bob Brigham.

His teaching coaching days were at the DeKalb Junior High Schools, where he started their programs.

He was very instrumental along with Hall of Famers, Ron Silverstein and Larry Stonitsch, in starting the present IKWF State Championships, now in their 23rd year.

He has been Vice-President of the IKWF for 5 years; Secretary Representative for l year; President for 3 different terms.

In 1979 he was named one of the Grand Marshalls for the IKWF State Finals.

He has been a Bench Official at the IHSA State Tournament for 13 years.

He hosted the Annual DeKalb Novice Tournament for 10 years.

In 1986 he was named a Friend of Wrestling at the Annual All State Banquet.