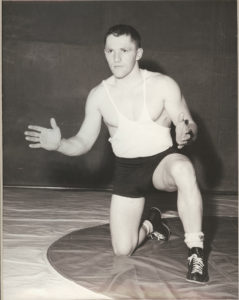 Art, originally from Sterling began his career at the High School level, moving on to Northwestern University, where in 1959 he was 4th in the Big 10 and 4th in the NCAA. The year 1960 saw him place 2nd in the Big 10 and win the NCAA Championship. He was coached during this time by his younger brother Ken, the present Northwestern coach and himself a member of the IWCOA Hall of Fame. Art in his senior year was named Captain of the team. He was also the recipient of the Big 10 Conference Medal of Honor, which is awarded by each School in the Big 10 to a Student who demonstrates ability in Scholarship and Athletics. His coaching tenure began at Niles East Fenton High School, continued at Wheeling where he began the program and on to Triton College, where he has turned out an excellent program. His teams in the past 13 years have won 4 State Championships; Placed 3rd two times in the National Junior College Championships; Placed 2nd one time and in 1977, his team won the National Championship. As a result of his consistent high placing’s, he was named Coach of the Year in 1977. Art has been a member of the United States Sport Council and this year has been selected the Coach and supervise the American Junior College Team as they participate in the Junior Pam American Games in Free Style. This event will take place in Caracas, Venezuela in June.