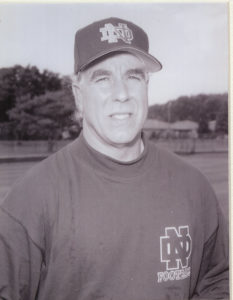 His Coaching career began at Marist High School in 1974. It was there that he and Paul Froelich began what has become one of the State’s top programs. Following his tenure at Marist, Augie became an assistant coach at Niles Notre Dame High School in 1977 working with Hall of Famer Jon Schaus. In 1986, Augie took over this program as the Head Coach.

During his career at Notre Dame, Augie has been responsible for 15 State Qualifiers, 3 Place winners, one of them becoming a State Champion. He has also coached 24 Illinois Cadet and Junior National Team Qualifiers, two of them have achieved All American Status. In addition to his position at Notre Dame, he also serves as Co-Head Coach of the Illinois Junior National Free Style Team, with Hall of Famer and high school teammate Jim Cartwright of Conant.

Augie has also served as one of Illinois’ top ambassadors to the sport of wrestling. He has opened the doors of Notre Dame to host kids and high school tournaments, the Junior Wildcat and Notre Dame Wrestling Clubs, the IWCOA Ultimate Dual, and the final wrestle-offs for the USA Freestyle Wrestling team. Mr. Genovesi also has eleven former ·wrestlers coaching and officiating in Illinois, Ohio, and Wisconsin.

Augies other accomplishments include, having served as an IHSA Official, officiating 4 regional tournaments and serving as President of the IWCOA during 1992 and 1993. He was an assistant Coach for the Illinois Seniors to the Pittsburgh Classic.

In 1988 Augie was selected as Notre Dame’s High School Coach of the Year by the Booster Club.

In 1992 Notre Dame High School recognized him for his tenure in coaching football and Wrestling with a Special Mass.