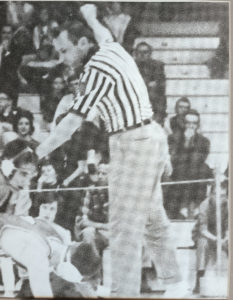 Ben began his career in wrestling at Rock Island High School, where he wrestled for Hall of Famer Ken Greene.

His Collegiate days were spent at Cornell College in Iowa during their Division I glory days. While There Ben won the Midwest Conference Title at 145 and he was a member of Cornells 1947 NCAA and AAU National Championship teams. Ben wrestled behind a 3 time All American in his weight class.

Upon graduation, Ben began his officiating career which spanned 23 years in Illinois. During this time he worked the Midwest Conference 12 times; Regional Tournaments 20 times and the Sectionals 20 times. He also worked the State finals 7 times. He was also a Rules interpret r for 3 years.