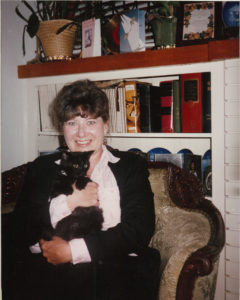 Bernie as her friends know her, graduated from The Immaculata High School in Chicago and DePaul University. It was not until she began teaching at Lake View High School 26 years ago, that she got interested in Wrestling.

In 1968, upon the urging of Bill Peterson, a Hall of Famer, she was asked to sponsor the Mat Maids of Lake View, which she did. Bill also persuaded her to go to a Mayor Daley event, which she did and found herself filling out bout cards. This started in 1969. She then began to learn how to pair contestants in the International style, a procedure she learned from Hall of famer Chuck Hansen. She has been involved in local, state and national and international events ever since.

* Been involved in some way All Chicago High School City Championships since 1969. Either pairing, timing or directing

* Been a member of the Mayor Daley Youth Foundation from 1970 until it changed to Illinois Wrestling Federation. She was a Secretary at that time.

* Paired all of the State of Illinois Free Style and Greco State Championship Series since 1970. The Outstanding Wrestlers Award in Greco Roman is named the Bernie Norris Award.

* She has been involved in pairing the Junior Nationals since 1972

Bernie has been the National Pairing Director for USA Wrestling for 10 years. She is also a member of the Executive Board of USW Officials Association.

Besides doing all of this she is the Girls Swimming Coach; The Boys and Girls Gymnastics Coach and for the last 10 years has been the Girls Athletic Director at Lake View High School.