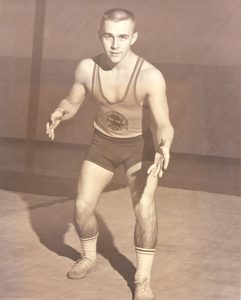 Bill Wrestled at Glenbrook High School for Hall of Famer Walt Sherman. He also had Jack Leese a Hall of Famer as an assistant. While at Glenbrook, Bill won the Championship at every tournament in the area including the Palatine Tournament Regional and Sectionals. He qualified for the State Three times, Placing 3rd and Winning Two State Championships, at 103 lbs. His overall High School Record was 105-7-0.

His collegiate days were spent at the University of Illinois where he wrestled for two years for Hall of Famer Pat Patterson. His career was shortened by size, since the smallest weight in college was 121 at that time. He was ideal for the Olympics that exist today, as his weight did not change much from High School.

In 1989 he was honored by the Chicago Sun Times as the Area All Time Best Wrestler at the 103 pound weight class.

Bill is presently a free-lance graph designer and is still semi-active as a spectator at wrestling events.