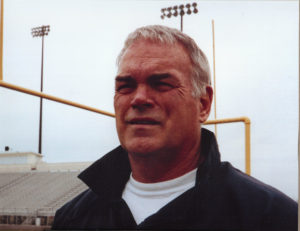 Bill Zimmer began his career at Harrisburg High School as a Football Player. They did not have Wrestling. His Collegiate Career was at Bradley, where he played football and began his interest in Wrestling. Leaving Bradley for the Armed Forces, where he played Football. During his service time, he was recognized for his ability and was picked up by the 49ers upon completion of his Military obligation. Bradley University was looking for a coach at the same time. Both areas offered about the same amount of money; and since Coaching looked more promising, Bill took the Bradley offer as the Assistant Football Coach and Head Wrestling Coach, an opportunity Bill states “I never regretted”.

Bill was at Bradley for 4 years and during this time developed a well-recognized program, a program that had two NCAA Qualifiers. In 1959 Bill moved to Lockport High School as the Assistant Football Coach and Head Wrestling Coach. He was the Varsity Football Coach after 1 year, a position he still maintains. He continued as the Varsity Wrestling Coach until physical injuries to his hip forced him out. Wrestlers do need to demonstrate.

His teams at Lockport during his coaching tenure have won over 275 dual meets; they have won 4 Conference Championships; 4 Regionals and 1 Sectional. His individuals have placed in the State 12 Times, with two of them becoming State Champions. All in all, he has had 33 State Qualifiers. This accomplishment has been achieved in spite of the fact, that Loch-port Junior High Schools do not have Wrestling Programs, Only Basketball.

Bill has been an Official for 33 years in Illinois, working only High School matches. He never could work a Regional, Sectional or State, because of the conflict with coaching. Now he is full time officiating.