Bob was born into a wrestling family. He had several uncles that wrestled at Vandalia High School and 4 brothers who also wrestled at Vandalia High School. One uncle was on one of the first Vandalia teams and was a state qualifier. At the time Bob wrestled, the Jr. High included 9th grade, so his wrestling career only lasted 3 years in high school. He was part of the team that was Mid-State Conference Champions, District Champions and 2nd place at Sectional in 1974. That same year, he earned a 4th place medal at the State Tournament. He also was the co-recipient with his brother Bill, of the Decatur Herald area wrestler of the year award. Bob officiated one year in 1975 but work and school delayed his future involvement in the sport of wrestling. Bob also played football and ran track for Vandalia and lettered all 3 years of high school. He was chosen as Most Valuable Player in football and in track his senior year.

Wrestling took a back seat in his life when he married his wife, Susan, in February 1977. (Don’t ever get married in February… especially the week of the state tournament, or you will spend each anniversary sitting in a gym!)

The YMCA in Vandalia sent a letter to the membership at large asking for any suggestions for new sports programs to be started in the community. Bob sent in a suggestion sheet expressing how he would like to see a kid wrestling program started in Vandalia. The next week he got a call from the YMCA director asking if Bob would help organize this new program. Bob and some other Vandalia dads started the Vandalia Jr. Wrestling Club in 1987. He was head coach for 18 years.

As a coach with the Vandalia Wrestling Club, he taught and coached basic principles of wrestling. This would provide a solid feeder program for the Vandalia High School wrestling program, which was under the leadership of Coaches Glen Exton and later, Jason Clay. Together they have developed the high school program into a wrestling dynasty.

The first group of Vandalia Jr Wrestling kids that fed into the high school program provided Vandalia with its first ever State Championship in 1996. Vandalia has also placed 4th in 1995, 1997, 1998, and 2016; placed 3rd in 2002, and placed 2nd in 2007 and 2018. Vandalia, as a team, has had a total of 20 appearances in Dual Team competition, and 3 individual State Champions who also got their start in the Vandalia Jr Wrestling program while Bob was the head coach.
Bob had 2 sons that wrestled for Vandalia. Jacob wrestled on the 1994-1997 teams and Bryan wrestled on the 1997-2000 teams. Both collected team state medals. Bob’s daughter, Julie, was a stat girl on the 2000-2004 teams earning a state medal with the 2002 team. Bob and his family continue to work and support the Vandalia wrestling program.

As an official of 20 years, Bob has been assigned 17 Regionals, 15 Sectionals and 11 State tournaments. He became an IHSA Clinician in 2014. Bob continues to go above and beyond as he supports the IHSA/IWCOA statewide effort to recruit and retain new officials. Bob organizes, promotes and teaches a yearly beginning Official’s Class in Vandalia, to train and encourage former wrestlers to learn how to officiate. 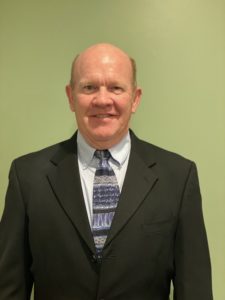