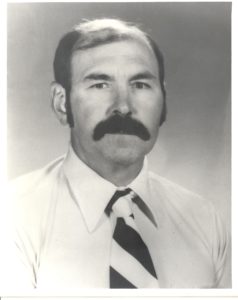 Bob began his high school career at Peoria Richwoods. He began his collegiate career at the University of Illinois where he not only wrestled, but was a member of the 1964 Rose Bowl Championship football team.

Bob began his coaching career at Loves Park in Harlem, Rockford, Illinois where he stayed one year before taking over the head job at his alma mater Richwoods. A position he held for 17 years before retiring from wrestling in 1984.

His teams always competitive won many dual meets, placed high in their conference numerous times. He had 34 conference champions, 27 regional champions, a number of state qualifiers with one being a champion.

He has been a District or Regional representative 10 years, and he was name AA Central Illinois Coach of the Year in 1981.

Bob has also officiated since 1968 at various levels, including the Kids State Tournament.

His summer work with the Illinois Wrestling Federation is extensive.

Bob still continues to teach at Richwoods and is the Varsity Line Coach for a team that won the Class 5 State Championship in 1984.