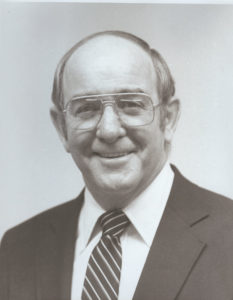 Bob is from Moweaqua, Illinois. He began his Wrestling career at Eastern Illinois. While at Eastern he received 4 varsity letters in football and 4 in wrestling. He was Captain of the Football Team. In Wrestling he was a qualifier for the Nationals.

Bob started his Coaching career at Urbana High School, moved on to Kankakee, then to Proviso west and finally he has spent the last 17 years as Varsity Coach at Glenbard North High School, a total of 24 years of coaching. He has coached Football and Girls Tennis during this time also.

His All-time Dual Meet Record at Glenbard North is 288-86-5. He is in the top 3 teams in regards to the longest winning streak – A total of 68 straight wins

Bob has hosted several Illinois Wrestling Federation tournaments, and has been on the coaching staff of several Junior National Teams. He was an assistant coach of the Junior Pan-American team in Mexico City in 1974. He has been a clinician at the Wisconsin Wrestling Coaches Association for several years; has been a guest clinician at several Illinois Camps and has been a speaker at the National High School Athletic Conference Association Convention and Seminar in Oklahoma City, Seattle and Orlando.