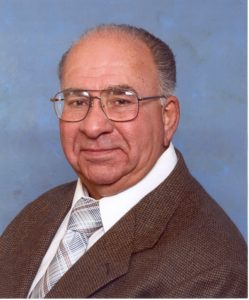 Bob Grizzi’s high school athletic career began at Ridgewood High School in Norridge, IL. He received seven Varsity letters; two in Cross-Country, three in Wrestling and two in Baseball. Wrestling was his passion and he was the voted most improved wrestler in both 1963 and 1964. Bob placed third in the Tri-County Conference in both 1963 and 1964, as well as third place in the IHSA District Tournament in 1963.

Upon graduation from high school in 1964, his college wrestling career began at the University of Illinois at Navy Pier, receiving two Varsity letters in 1964 and 1965. He was also voted most improved in 1965. In 1969, Bob graduated from University of Illinois at Chicago Circle. His major areas of study were Physical Education and U. S. History. He graduated with highest honors, as well as receiving the Chancellor’s Award for Highest Academic Achievement; attaining a perfect 5.0 grade point average during four years of his five years of study.

In 1968 Bob began student teaching at Maine South High School in Park Ridge, Illinois. There, he coached wrestling under the supervision of Coach Tom Ziemak, an IWCOA Hall of Fame coach. In the fall of 1969, he began his professional teaching and coaching career at Reavis High School in Burbank, IL. Bob taught at Reavis for 33 years (1969-2002). During his teaching career, he taught Physical Education, U. S. History and Health. He was an assistant wrestling coach under another IWCOA Hall of Fame coach, John Fitzgerald and also an assistant football coach. During this time, he received the Reavis High School Coach of the Year Award in 1970.

In 1977 Bob began his officiating career. He worked as an official in IESA and Kids Federation Wrestling for several years, as well as IHSA wrestling for 25 years (1977-2002). Events he officiated included:

Bob has been married to his wife, Nancy, since 1967. They have two sons that have been involved in wrestling as competitors and officials. .

In 2002, Bob retired and moved to Lake Normal, North Carolina. Both of his sons and their families also live here. Nancy and he also travel in their motor home whenever we get the urge.