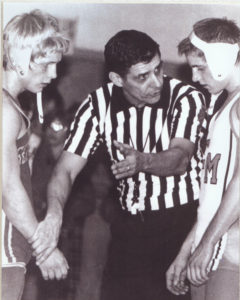 Bob is from Dubuque, Iowa where he did not wrestle. He enlisted in the Marines out of High School. When he returned he enrolled at the University of Iowa where he got interested in wrestling. He later transferred to Wartburg College. After Graduation he started the Wrestling program in Northwood, Iowa. He then transferred to Rockford West, Illinois where he started their program. After 4 years he left Rockford to become the Head coach at Illinois State University, a position he maintained for 21 years.

While at Illinois State his teams had a 103-39-5 record – Won 5 IIAC Championships and twice were 2nd. He had 15 All Americans, two of whom were champions, including Hall of Famer Willie Williams.

During all of this time, he managed to get his MA from Northern Colorado and his PHD from Utah University. He also got involved in officiating. He has officiated in Illinois for 17 years which included 6 Regionals, 6 Sectionals and 2 State Finals. He also hosted the State Championships two times.

He has been named the Amateur Wrestling News Division II Coach of the Year in 1966 and has been elected to the Illinois State University Hall of Fame. He was named to the All Marine Football Team while in the service.

In 1968 he was named to the Who’s Who in Illinois Higher Education. In 1979 he was the Representative to the International Committee as the Academic Mentor for Elite Athletes for US Olympic Committee.