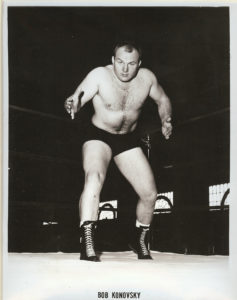 The late Bob Konovsky wrestled for Morton Twp. High School in Cicero. While in High School he was a State Champion at Hwt and a State Runner-Up.

His college career was at the University of Wisconsin. During his four years at Wisconsin he was the Big 10 Champion 3 times and Placed 3rd; 2nd and 2nd in the Nationals.

His Senior Year he was Captain of the Wrestling Team.

He was awarded the Big 10 Scholastic Achievement Med al in 1956 for Athletic and Academic Excellence.

Bob also played football for Wisconsin, being named All Big 10 in his senior year. He later played professional football for the Chicago Bears; The Chicago Cardinals and ended his play with Denver.