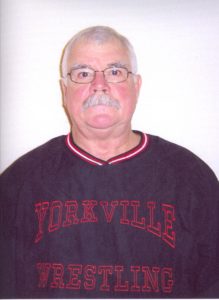 Bob Long attended Bradley-Bourbonnais High School in Bradley, graduating in 1969. He participated in football for two years and was a four year letter-winner in wrestling. He was unbeaten during the regular season, winning the district. He did not place in the sectional, having lost in the wrestle-backs. He was named as a captain and most valuable wrestler his senior year.

After high school, Bob attended Illinois College and played football for two seasons. At the end of the first semester of 1970, he transferred to Northern Illinois University and received a B.A. in History in 1974. He returned to Olivet College and received his teaching certificate in 1978.

In the fall of 1978 he was hired at Yorkville High School and coached freshman and sophomore football from 1978 to 1985. He coached wrestling at Yorkville with Hall of Famer Dennis Hastert from 1978 until 1981. He left coaching wrestling in 1985 until 1988, when he took over as the head coach at Yorkville High School. He served as the head coach of the storied Yorkville program for the next 13 years. During that tenure, he had a dual team record of 180-74-1. His teams won four Interstate 8 Conference titles, three Little 7 Conference crowns and one Suburban Prairie White Conference championship. Under Bob’s leadership, Yorkville won back to back IHSA State Dual Team Titles in 1993 & 1994 and placed 3rd in 1995. He coached forty-four state qualifiers, fifteen state place-winners and four State Champions. Bob coached two of his sons, one (Steve) to a dual team state championship and the other (Matt) to two state medals, a 4th place finish and a State Championship.

Bob was selected by the IWCOA as Class A Coach of the Year in 1993 and Sectional Coach of the Year in 1993. He received Special Commendations from the City of Yorkville as well as an Illinois State Legislature Resolution for athletic performance relating to the wrestling team. Other special awards he has received are student honors known as “The Most Influential Educator of My Life Award” from honor students at Yorkville High School.

He enjoys many activities and hobbies, most notably traveling with his wife, Pat.