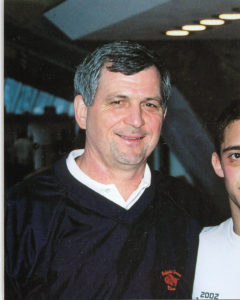 Bob Tipsword graduated from Wheeling High School in 1969. He was captain of the squad his senior year. He also played football for two years and ran track for two years. While at Eastern Illinois University, he wrestled for Hall of Farner “Hop” Pinther.

Upon graduation from EIU, Bob began teaching at Cooper Junior High School in Buffalo Grove as a math and P.E. teacher and wrestling coach in 1973.

Bob was selected as a “Friend of Wrestling” by the I.W.C.O.A in 1992 and was named Pioneer Press Coach of the Year in 1999. In 1986 Bob served as an assistant coach for the Mid Suburban League All-Stars vs. Canada.

Bob also serves as an elder and Sunday school teacher, youth director and usher for the Living Christ Lutheran Church. He acted as captain for the Relay for Life team from 2000 to 2004.