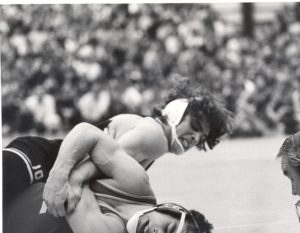 Upon graduation, Brad was involved with the Illinois Wrestling Federation Junior Team that went to Iowa. He placed 2nd in the Greco-Roman and 3rd place in the Freestyle. He was also 4th in the junior worlds.

His collegiate wrestling was at the University of Iowa where he was a three time Big 10 place winner and as a senior won the NCAA Division One National Championship.

His post university wrestling includes a 5th in the Senior AAU Free Style and a 4th in the AAU Greco Roman. It also includes being six-time Midland’s Place winner.

His coaching began in Lisbon, Iowa a school in the smallest class of 3 classes in that state. He is still coaching at this school.

Since 1980 alone at this school, his teams have 7 State Individual Team Championships, with 54 State Place winners, 26 of whom were champions. Twice they were second, once 4th and once 6th. In the Dual Series, his teams have won it twice and finished 2nd once. He has had two 4-time State Individual Champions, one of whom went onto become a two-time National Champion.