Brian Glynn started wrestling at the age of 5 and almost left his shoes on the mat for floor hockey after going winless his first two years. He decided to continue wrestling for the Orland Park Pioneers one more year and started having success. He was coached by IKWF legends Joe Tholl, Paul Tholl, Mike Urwin, and Pete Andreotti. Brian went on to win two IKWF state championships and earned the Marty Combes Award for most outstanding wrestler in the Novice division in 1995.

Brian attended Providence Catholic from 1997-2000 and was coached by IWCOA Hall of Famer Keith Healy and Scott Richardson. At Providence, Brian was part of 4 team State Championships. He had a career record 134-25 and was a 2-time state place winner. Brian took 5th place as a junior at 145lbs. and was the state runnerup as a senior at 171lbs. He also won the Ken Gerdes award his senior year and was voted team captain. Brian placed 4th at the NHSCA tournament in Virginia following his senior season earning All-American honors. Brian also earned All-State honors in football in 1999.

Brian would wrestle at the University of Illinois for legendary coach Mark Johnson and Jim Heffernan. He became a 4-time national qualifier at 174lbs/184lbs. Brian earned All-American status his junior year placing 6th and once again his senior year placing 3rd at 184lbs. He sits currently 9th All-time in career wins at the University of Illinois with 116 wins. His teams would win two Big Ten Team Titles and two Midlands Team Titles. He was voted team captain and MVP his senior year.

After college, Brian became the first head coach of Lincoln-Way West in 2009, after being molded and mentored by the iconic Mark Ruettiger. In its short tenure LW-West has produced 18 state placers, has won the regional title 8 times, and placed 3rd in the dual team series in 2017. He has a current career dual meet record of 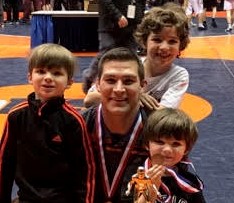