Brain McTague was born in Morris, IL and graduated from Morris Community High School in 1982.   He wrestled all four years at Morris for Coach Herb Shaw.  Brian won a State Championship in 1982 with a record of 35-1-1 and qualified for state as a junior.  He had a career record of 120-19-1.  Brian won 67 matches during his junior and senior seasons.  He also played baseball four years, football three years and ran cross country one year.  He was team captain and All-Conference.

After high school, Brian attended Southern Illinois University-Edwardsville to wrestle for IWCOA Hall of Fame member Larry Kristoff.  While at SIU-E, Brian was a three-time NCAA Division II All American, placing 3rd and was a two-time Runner-Up.  While competing at SIU-E, the Cougars won National Championships in 1984, 1985 and 1986 and were Runner-up in 1987.  He graduated in 1987 with a B.S. in Education.

During his tenure coaching at these schools, Brian has been involved in coaching 45 state qualifiers and 25 state place-winners, including four State Champions and 7 runners-up. 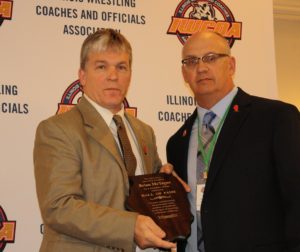