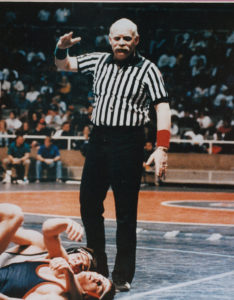 Bruce wrestled at Morton West High School.  He did undergraduate work at Monmouth College and received his Master’s from Roosevelt University in Chicago.  He began teaching at Carmel of Mundelein, and then moved to Antioch where he assisted in wrestling for 4 years. He was the dean of students for the past 20 years at Round Lake.

He has also been the Grand Marshall of the Suburban Conference in 1990.