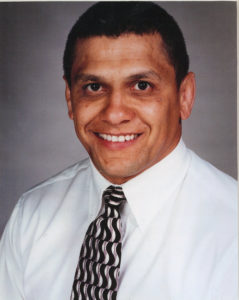 Carmelo Flores was born and raised in Chicago. He attended Lake View High School and was graduated of the Class of 1975. He wrestled for four years at Lake View under Hall of Fame Coach Bill Peterson. He was a two time state qualifier and placed fifth in 1975. He had a career record 96.14. He placed second in the National Freestyle at Chapel Hill, NC. Carmelo was captain of the fresh-soph football squad and wrestling captain for three years. He also won two letters in football and three letters in track.

As a student at the University of Wisconsin at Whitewater, Carmelo wrestled for four years. He was a two time NAIA All-American, placing fourth and sixth. He had a career record of 90-33. He received his B.S. in Education in 1980.

As a member of the 1984 Puerto Rican Olympic team, he placed 9th in Los Angeles. He finished 4th in both the 1978 and 1983 Pan-Am Games. He was 1982 Central American Games Silver Medalist and won the Gold Medal in 1983 at the Carlos Flores Greco-Roman Tournament in Mexico City.

Carmelo began coaching at Proviso West. After five years, he was named head coach at Lake View. During his fifteen years at Lake View, his dual meet record is 158-50 and he has had thirty state qualifiers and one place-winner. Carmelo has been a member of the City of Chicago Fire Department for the past fifteen years and is EMT. In addition, he has participated in the Beat the Streets program in the neighborhood.