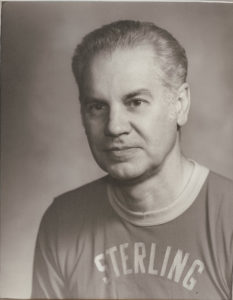 Carson has been at Sterling for 21 years, 19 as the Varsity Coach. During his tenure, he has won 273, lost 83 and tied 8 dual meets. His teams have won 13 North Central Conference Championships, 12 District Championships, 4 Sectional championships and in the State Finals, his teams have place Second in 1964 and again in 1973 and 5th in 1968. Carson was named Coach of the Year in 1973. Along with his High School duties, he has developed one of the finest Park District Wrestling Programs in the State, one that has been function for 18 years. Carson is also Secretary fo the IWCOA and has served as Tresurer.