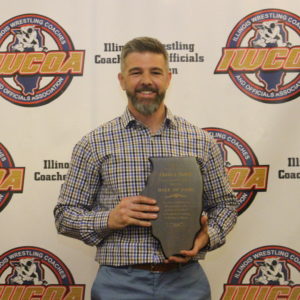 Charles Martelli began his wrestling journey in 6th grade gym class. He immediately connected with the sport. Through the help of his parents he was able to find Naperville’s only wrestling club, The Patriots club, where his wrestling career took off. Throughout his 8th grade season he would regularly visit Naperville North High School’s wrestling room and meet IWCOA Hall of Fame Coach Tom Arlis. Charles got his first taste of success in the 8th grade when he placed second at the Illinois Kids Wrestling Federation State Championships.

Charles entered Naperville North as a freshman in 1994. Thanks to Coach Arlis’ guidance, Charles moved down one weight class and earned a spot in the varsity lineup. As a freshman, he compiled a 26-6 record. After a full off-season of freestyle wrestling, Charles returned as a sophomore determined keep his spot in the lineup. He finished with a 43-3 season, won both regionals and sectionals, and he placed 3rd at the State tournament with his only loss coming to 4x IL state-champion, Joe Williams. Charles won individual state titles in 1997 and 1998 after back to back undefeated seasons and set the state record for the fastest pin in the 160 lbs. finals match in 1 min 13 seconds. He finished his high school career with a record of 160-9, was an Asics high school All- American, multiple time IL freestyle and Greco state champion, Naperville North’s Athlete of the Year, and set team records for consecutive wins (92), pins in a season (32), and team points in as season (267).

Charles continued his academic and wrestling career at the University of Michigan where he earned a full 4-year athletic scholarship. He was a four-time varsity letter winner under head coach Joe McFarland. He compiled over 70 wins for the Wolverines, was three-time all-Big Ten and 3X NCAA qualifier at two different weight classes and helped lead the Wolverines to two top 10 finishes at the Division 1 NCAA Championships.

After graduating with a bachelor’s degree from The University of Michigan in 2002, Charles stayed involved in wrestling by authoring a book, How to Become A State Wrestling Champion. He coached alongside IWCOA Hall-of-Fame wrester Sean Bormet at the Overtime School of Wrestling and also spent time coaching at Fenwick High School in Oak Park.

Charles still has the same competitive drive and thirst for success which continues to show itself professionally and personally. Although he has not been on the mats in several years, he competes in utra-marathon trail running and team adventure racing. To support his hobbies, he has been in software sales for the last seven years.

Charles currently lives in Evergreen, CO with his wife Tanya and three children ages 6, 4, 2. They enjoy spending time in the mountains taking advantage of all Colorado has to offer from snowboarding to mountain biking to fly fishing. Charles owes all of his successes to his family and support structure. In particular his mom, Linda, and father, Art, who sacrificed more than he could imagine to get him where he is today. His wife Tanya is a constant source of inspiration and energy. The leadership from coaches like Tom Arlis, Tom Champion, Joe McFarland and many more paved a path for Charles’s wrestling and life successes.