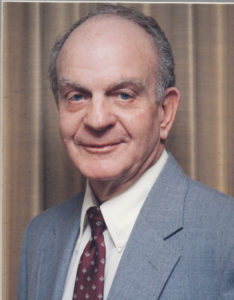 Charlie began his career at Oak Park High School where he participated in football and track all four years. He was named track captain.

College found him at Dubuque University where he participated in football and track. He was named football captain.

He also attended Northern Illinois University where he received his MA.

His coaching-teaching began at Lake Park High School, where he coached, football, basketball, and baseball. He then moved to Prospect where he was involved with basketball and then to Palatine where he first got involved with Wrestling, still coached track and was the head football coach. His last 20 years were spent at Conant High School as the Athletic Director in charge of developing many good programs, among them the wrestling program.

He served on the Illinois High School Association Wrestling Advisory Board for 3 years. He has been a Bench Official at the State Wrestling Finals 25 years and has been a Head Timer and timer at the State Track meet 27 years.

He has also served as a Bench Official at 1 NCAA Wrestling Tournament.

He was President of the Mid-Suburban League Conference 3 years, the Secretary 3 years and the Wrestling Chairman for 10 years.