Chase Beebe started wrestling at age 5 with The Waubonsie Wrestling Club. He eventually moved on to the Martinez Elite Fox Valley Wrestling Club, where he won the 95 lb IKWF State Championship in 8th grade.  After grade school Chase attended Montini Catholic High School, where he earned varsity letters in both football and wrestling. Despite being regarded as a tough hard-nosed defensive back and special teams player, it was on the wrestling mat where Chase really excelled and had a record breaking career.

In 2000, his freshman year, he helped lead the Broncos to their first Dual Team State Championship ever, also the school’s first State Championship in any sport, and he also captured the Class A 103 lb. State Title as well.  Chase continued his winning ways at Montini by going on to win 3 additional individual state titles, and 2 more team titles, eventually being a part of an astounding 7 wrestling state championships in his four years!  After winning the 130 lb. title his senior year, Chase became only the 7th 4-time state champion in IHSA history.  Overall at Montini, Chase posted a 174-10 career high school record, with 77 pins and 34 technical falls.

After high school Chase moved on to Purdue University, where he competed as a true freshman posting a 16-9 record with 10 pins, one of the top pin tallies in the country at 125/133 lbs.  After transferring to Eastern Illinois University, he tallied a 9-0 record his sophomore year, before the world of mixed martial arts beckoned to Chase and he dove head first into pursuing his fight career.  He earned a 30-10 professional career record, including 20 submissions, and 3 TKO’s.  He was a two-time World Extreme Cagefighting (WEC) Champion, as well as a World Fighting Champion (WFC) and a Rukus champion.

Currently Chase is still a big fan of MMA, and enjoys doing anything outdoors, especially sports. 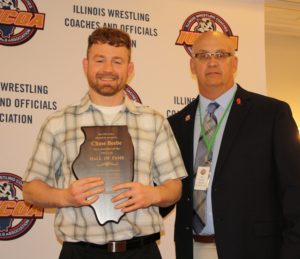