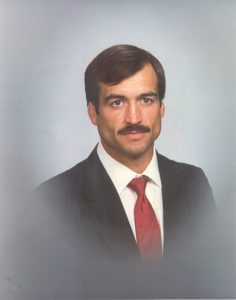 Dale Eggert began wrestling as a freshman at Libertyville High School. He was a two-time State Qualifier and placed 2nd in the State as a senior in 1974. Dale was named the schools “Outstanding Athlete” while also competing in football and baseball.

Dale wrestled collegiately at Southern Illinois University-Carbondale and was named the team’s “Most Valuable Wrestler” During his senior year. He started his coaching career at Libertyville High School serving as an assistant for nine years. In 1987 he was named IWCOA Assistant Coach of the Year.

In 1988 Dale began his head coaching tenure at Libertyville. In the past 12 years he has coached 37 State Qualifiers, 7 Place winners and one State Champion. His teams have won 222 dual meets during this period. His teams have won 10 Regionals and 10 Conference Titles and have qualified for the Dual Team State once.

Currently Dale teaches Health Education at Libertyville. He is also the Head Freshman Football Coach and has coached baseball, soccer and softball.