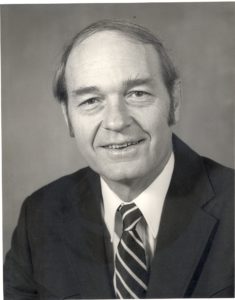 Dale’s first teaching experience was at Ellsworth School that did not have wrestling. He moved to Wheaton where he was an assistant at Central for 4 years. When the North School opened, he was named head coach. He has been the School’s only Coach, finishing his 23rd year at that spot. His achievements at North are numerous: 237 dual meet wins; 6 Conference Team Championships (54 Individual Conference Champs); Several Region al Titles and has placed in the top 5 in the Sectional many times. Besides the many conference, Regional and Sectional place winners, he has had 38 State Qualifiers of which 25 were place winners – One of them, his son Scott was a State Champion. His Teams have been in the Top 10 Downstate 4 times – His 1979 Team placed 3rd.

Dale has been very active in Wheaton Wrestling, being one of the organizers of the Youth Programs. He has been active in the IWCOA since its inception holding a number of offices during this time.

Dale has also been very active in the Illinois Wrestling Federation; hosting a number of tournament s at Wheaton North; Officiating in many of the tournaments, including the old days at Navy Pier and he has been on the National Coaching Staff – in the Summer 7 times.