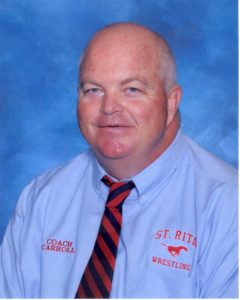 Dan Carroll was born in Chicago. He attended Downers Grove North and was a 1979 graduate. He was three sport athlete, having participated in football, wrestling and baseball.

Dan attended Truman State University in Missouri and graduated in 1984 with a Masters degree. He coached both football and wrestling at a local high school.

In 1986 Dan returned to Chicago and served as an assistant coach at St. Edward High School and coached there until 1988. He then moved on to Weber High School in 1990. He coached at Weber for seven years and had two individual state champions and four state place-winners. His team won the IHSA Regional title in 1997. In 1996 he received the Tony Lawless Award as the Chicago Catholic League Coach of the Year. He then moved on to St. Rita in 1997 and remained as their head coach for eleven years.

While at St. Rita, Dan coached back-to-back Class AA State Championships in 2003 and 2004. St. Rita also placed second in 2006 and placed third in 2005 and 2007 and was a Dual Team State Tournament Quarterfinalist in 2008 and 2001. Dan’s teams won over 210 dual meets and eight Regional Championships. He has coached over 80 state qualifiers, forty-four state place-winners and twelve State Champions. He received the Tony Lawless Award three additional times while at St. Rita. In 2003 Dan was named the IWCOA Coach of the Year.

In addition to his IHSA coaching experience, Dan volunteered working tables at tournaments and coaching Cadet and Junior National teams. Dan is currently active as both a teacher and coach at St. Rita of Cascia High School