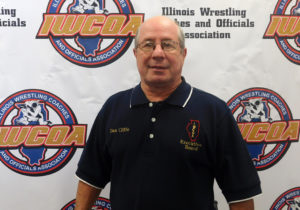 He began his coaching career at DeKalb high School in 1981 as an assistant, and in 1983 he became the Head Coach. His record through 1992 included 45 State Qualifiers with 9 place winners, three of them Champions. His teams have won 10 Conference Championships, 10 Regionals, and six times his teams have been down state, finishing third and second.

Dan who teaches Mathematics, was voted Teacher of the Year in DeKalb County in 1990.

Dan was President of the Illinois Wrestling Coaches and Officials Association in 1990 and in 1991.

Dan Cliff is a product of the tradition rich DeKalb Wrestling program. A two-time State Champion, he had a career record of 79-7-2 for three years. Dan was a First Team High School All-American. His senior year he won the National Junior Freestyle and Junior National Greco-Roman National Championships.

After graduation in 1972 he went on to Northern Illinois University. While at NIU, Dan won the 1974 National Open Freestyle Championship and the 1977 National Open Greco-Roman championships once.

Dan returned to DeKalb High school in 1982 to become an assistant wrestling coach and in 1983 took over as Head Coach. During his thirteen-year tenure his team’s compiled a 233-48-2 dual meet record. DeKalb’s team accomplishments were:

In 1993 Dan was inducted into the IWCOA Hall of Fame and served as Grand Marshal for the 2000 IHSA Individual State Championships. He was nominated as Coach of the Year by the IWCOA eight times. He is member of the IHSA Wrestling Advisory Board, the IWCOA Executive Board and the IWCOA Hall of Fame Selection Committee. He has served as President of the IWCOA on two separate occasions and is presently the Membership Chairman.

Dan is also Chairman of the Thomas and Beverly Cliffe Memorial Scholarship Committee that provides a scholarship yearly to students from DeKalb High School.