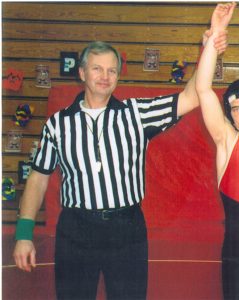 An educator for the past 32 years, Dan Farinosi has been a Principal at Frost Junior High School for the past 10 years. He has lived in the Hoffman Estates/Schaumburg area since he was 10 years old.

A 1963 graduate of Palatine High School, Dan earned his Bachelor’s degree from SIU-Carbondale in 1968 and his Master of Science in Education Administration from Northern Illinois in 1972.

From 1995 through 1998, he served as the IHSA on the Sportsmanship and Ethics Committee. During this time the committee developed the Sportsmanship Summits currently in place. He has been an IHSA Rules Interpreter from 1998 to the present time.

Dan has been a member of the IWCOA Executive Board serving as the Official’s Representative for three years and has worked as a teacher of IWCOA Official’s classes for 5 years. In 1995, he was selected by the IWCOA as the Official of the Year, and in 1997 the IWCOA name him as a Friend of Wrestling.