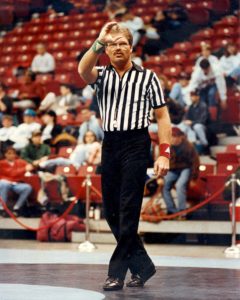 Through the 2000 wrestling season, Dan has spent 25 years as an official, he has officiated 22 Regionals, 18 Sectionals, and 9 Individual State Tournaments. He has officiated at the Dual Team State 6 times and 4 times on the championship bout. Dan worked 12 IESA State Finals, serving as the head official 2 years. He has worked 2 Prairie State Games, 3 Illinois, Class A vs. Class AA Duals, 3 Illinois/Indiana Classic Duals, the NCAA College Division 5 years and one NCAA Midwest Regional.

Dan was named IWCOA Official of the Year in 1994 and National Federation Illinois Official of the Year in 1997. Also, in 1997 the IWCOA named him as a Friend of Wrestling. He served on the committee with the IWCOA and IHSA for mandatory licensing clinics and was the wrestling officials’ representative for the IHSA advisory board for 6 years. Dan served as the lead instructor at the IWCOA officials’ clinics for 10 years. He is the current (1999-2000) IWCOA President.

Dan presently serves with the Lincoln Rural Fire Protection District and was Chief for 5 years. He has served as director of Logan Count Emergency Services and Disaster Agency and is a member of the Logan County 9-1-1 board, serving also as its chairman. In 1994 Dan was selected as Logan County Citizen of the Year and as the Rotary Club Vocation Award winner. He is listed in Who’s Who National Registry and has officiated various levels of softball for 10 years.