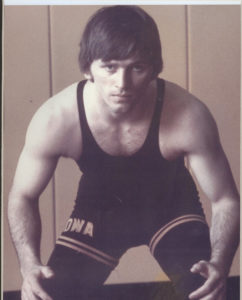 Dan began his wrestling career at Libertyville High School where he wrestled for Bob Buzzed. He placed 3rd in the state as a junior and was Champion his Senior year with a 37-0 record.

College was the University of Iowa, where he was a 4 time All Big 10 Place winner 4-3-2-2 and a 3 Time All-American, placing 3rd, 3rd, and as a senior becoming the Champion.

During his wrestling career, he was also 4th in Greco Roman in the AAU’s and 4 time place winner in the Midlands.

For a number of years he worked as a clinician at the University of Illinois Sports Camp, the J. Robinson Intensive Camps and the Steve Combs Sports Camps.