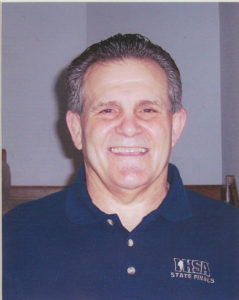 A 1961 graduate of Fenton High School in Bensenville, Dan Summers wrestled for four years in high school. He also played football and baseball. He attended Arkansas State University to play football and was a four year letter winner. He was named All­ American in 1964 and 1965.

In 1967 Dan was drafted and served one year in Vietnam. Upon his discharge in 1969 he began teaching at Hersey High School in Arlington Heights. He was an assistant wrestling coach for eighteen years. He also coached football for twenty years, boys baseball, girls golf, boys golf and girls bowling. He started the girls golf program at Hersey.

Dan has been tournament manager for the Mid-Suburban League Conference Wrestling tournament for twenty-three years. He has also managed thirteen IHSA Regional tournaments and has run the Harper College regional for five years. He has been an assistant at the head table for the IHSA State Individual State Tournament since 1973. Since his retirement from coaching, he has served as an announcer for wrestling meets at Hersey High School.

In 1998 Dan was inducted into the Hall of Honor at Arkansas State University. In 1966 he was listed in the “Who’s Who in American Colleges and Universities”.

Dan retired from teaching at Hersey High School in 2000.