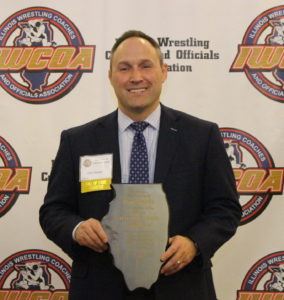 As a youth wrestler Dan Weber was coached by IKWF Hall of Famer Fred Arkin who provided Dan with a solid technical foundation, drove him all over to compete and believed in Dan more than Dan believed in himself. At Jane Addams Jr. High in Schaumburg Dan was coached by Bob Streepey who was a great motivator and taught him to bring focus and intensity to every practice. Dan would become a two-time IKWF State Champion.

A multi-faceted Conant High School student, Dan played football (fr/soph), soccer (jr/sr) and he starred as Conrad Birdie in the high school’s performance of Bye Bye Birdie his senior year. Coached by IWCOA Hall of Famer Jim Cartwright, Dan would be a 4-time State qualifier and the first ever 4x Mid Suburban League Wrestling Champion. In 1993 he made the USA Cadet World Freestyle Team. In 1996 as an undefeated 50-0 senior, Dan would end his high school career the IHSA State Champion at 152-pounds.

Weber went on to Indiana University to wrestle for the Hoosiers from 1996-1998. After transferring from IU to Wheaton College, Dan compiled a 54-4 record over two seasons. He placed 3rd at the NCAA DIII championships in 2000 and in 2001 Dan would win the DIII National Championship.

Following his graduation from Wheaton, Dan stayed involved in wrestling. He served as an assistant coach under his collegiate coach, Seth Norton for several years and in 2008-09 he served as Wheaton’s head wrestling coach as he and his family were preparing to move to Zambia as missionaries. In recent years he has served as the color commentator on live broadcasts of the championship matches at the Pete Willson-Wheaton Invitational and in October of 2016 he was inducted into the Wheaton College “Hall of Honor” in recognition of his accomplishments as a wrestler.

Dan and his wife Amanda will celebrate their 16th wedding anniversary in March of 2018. They live in the western suburbs of Chicago with their three children: Micah (12), David (10) and Lila (8).

Dad Mike Weber – introduced me to wrestling, made enormous sacrifices so I could have opportunities to wrestle, and loved me way more than he loved wrestling.

Mom Martha Weber – Sat in more gyms for more hours than anyone should ever have to. I never heard her complain about it and she always cheered enthusiastically whether I was winning or losing.

Brother Ron Weber – He’s been my biggest fan for as long as I can remember. He still thinks I’m 10x the wrestler I ever was.

Sisters Katie and Karyn – They too sat in far too many gyms and they really had no choice. Additionally, they would occasionally be afflicted with some kind of skin funk because of my dirty clothes or towels…and they still loved and supported me.

Uncle Paul Preissing – he spent hours and hours drilling arm drags, high c’s, duck unders, and fireman carries with me. He also watched nearly every major event I was in from Jr. High through High School, including the Cadet World Championships in Duisburg, Germany.

Jim Cartwright – took the good foundation I had and made it much better. He improved my technique every day. He sacrificed a lot to drive me to summer tournaments and to coach me in the off season. Thank you to the entire Cartwright family!

Seth Norton (Wheaton College Coach) – He was the perfect coach for where I was at in my career. He pushed me hard enough to help me improve and win, but he gave me the space I needed to finish school and have a great college experience.