Dave Fellinger was introduced to wrestling at the as of eleven when his older brother tried out for the high school team.  As with many of us with wrestling in our blood, the family room floor was the perfect practice arena to learn the sport.

By the time he entered Forest Hills Central High School in Grand Rapids, Michigan, Dave knew what to do and how to do it.  He was only lacking size…not weighing 100 pounds until his junior year of high school.  He still managed 100 wins during his high school career and was a two-time finalist in the state tournament.  He was a four-time state champion in Freestyle and four-time state champion in Greco-Roman and competed in the USA Junior Nationals in Fargo his junior and senior year.  He was a 1979 graduate of Forest Hills Central High School.

Dave continued his wrestling at Coe College in Cedar Rapids, Iowa.  He was a four-year starter and a three-year team captain at Coe.  He compiled a 74-11 record and was 3-time conference champion and three-time NCAA Division III National Qualifier.  Dave graduated from Coe in 1983 with a degree in Business and finance.

A few years after graduating and moving to Chicago, Dave continued his involvement with wrestling by registering to become an IHSA official.  Over the course of 36 years, Dave has officiated 30 regional tournaments, 20 sectional tournaments and 11 individual and Dual Team state finals.

Dave and his wife Kelly live in Chicago where he is President of Apparel Incentives.

Dave would like to let the young wrestlers in this room know that when your wrestling days are over, officiating is a great way to remain involved and give back to the sport that served and shaped us all so well. 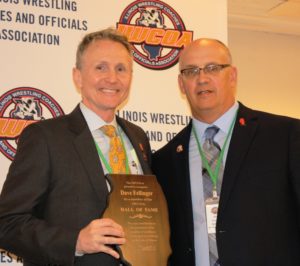