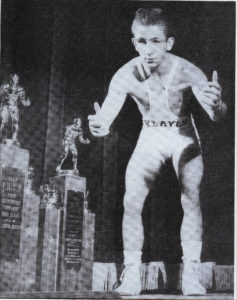 A 1962 graduate of Reavis High School, Dave Jackson was a two-time state champion for the Rams. Born in Chicago, he also won three conference and three district titles. His high school career record was 83-3. He was captain of the wrestling team and selected as the most valuable wrestler. He also competed in track and football in high school.

Dave went on to wrestle at Indiana University. He wrestled for three years at Indiana and had a career record of 19-3. He was Indiana College State Champion.

After graduation from college, he taught physical education for thirty-seven years. He also worked as an official for over 20 years and was named S.I.C.A. Official of the Year in 1982. He officiated for ten Illinois Kids State Tournaments.

In 2001 Dave received a special recognition award for all of his years of dedication and support to the Special Olympics. He was 1980 Illinois State Arm Wrestling Champion. He was also state weightlifting champ in 1981-82. In 1983 he was named Tinley Park 16″ Softball Player of the Year.