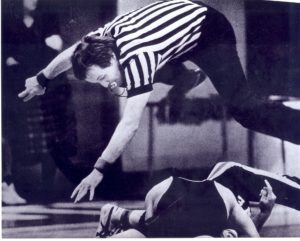 A 1967 graduate of Hinsdale Central High School, Dave Mathews won 47 career matches under Hall of Fame coach Rex Whitlatch. He was All-Conference two years and a 2 time sectional qualifier. He was Co-Captain and Co-MVP his senior year. Dave wrestled at Yankton College where he was a two-time NAIA National tournament qualifier. He had 55 college wins and was team captain his junior and senior year.

In addition to his coaching duties, Dave has contributed as a bench official for 8 years at the individual and Dual Team State Tournament and worked as a weigh-in official for 1’4 years.

Dave has over 31 years of officiating experience (3 years in South Dakota and 28 years in Illinois). During that period he has worked the IKWF State Finals (17 years), IESA State Finals (7 years), IWF State Finals (one year), and IHSA Individual State Finals (10 years) and IHSA Dual Team State Finals (6 years). He has also officiated numerous regional and sectional level events of all of these organizations. In addition, Dave has been a familiar face at many of the spring tournaments on a volunteer basis. He has officiated the IWCOA All Star Dual four times. In 1987 Dave was selected the SICA Official of the Year and he was named the IWCOA Official of the Year in 1987 and 1989. In 1997 the IWCOA named him as a “Friend of Wrestling”.

In 1977 Dave was named Teacher of the Year in the Woodridge School District.