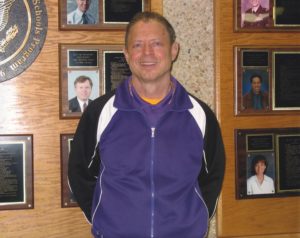 Dave Froehlich was born in Chicago and attended East Leyden. He wrestled for legendary Hall of Fame coach Charlie Farina. A 1971 graduate of East Leyden, Dave placed 3rd in the state his senior year with a record of 27-3 at 155 lbs. He was team captain his senior year. Dave was also state Freestyle Champion his senior year.

Dave attended Northwestern University and wrestled for another coaching legend and Hall of Fame member, Ken Kraft. He was a four year starter at Northwestern and earned his BA in

Education in 1975. He was 2nd in the Big Ten in 1974 and placed 4th in the NCAAA that year. His senior year he was Big Ten Champion and finished in the top 8 of the NCAA’s in 1975. He was also team captain his senior year. Dave received the Orion Stuteville Award for most team points, Waldo Fisher Award for Highest Standards of Interscholastic Athletic Competition and Smart Award of Merit for academic achievement. He was also selected to receive the Big 10 Conference Medal of Honor given to one athlete at each Big 10 school for athletic & academic excellence.

After graduation from Northwestern, Dave began teaching and coaching at Rolling Meadows. He has been head coach at Rolling Meadows for 33 years and serves as boys athletic director, health and PE teacher and head wrestling coach. He has had a career record of 354-285. He has coached 37 state qualifiers and 10 place-winners.

Dave was named to receive the Principal’s Award for contribution to education at Rolling Meadows High School.

His hobbies include musical instruments and power boating.