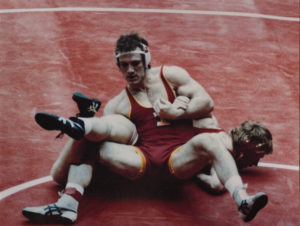 During his high school days at St. Charles, Dave won the UpState 8 Conference Championship two times, was a three-time Regional Champion and a two-time Sectional Champion, this being culminated with winning the State Championship in 1974 with a 34-0 record, including 24 falls. His overall varsity record was 76-11-3. He was also a two-time Illinois Free Style champion, a two-time Illinois State Greco Roman Champion, a two-time Junior National Greco Roman Champion and once a runner-up. He was named outstanding in Greco Roman both years he participated. He had the most falls both times he wrestled in the National Juniors, he also place 5th in the National Junior Championships in Free Style. He was selected for the Illinois Team tour of the West and was selected for the National Team to Finland.

His collegiate days were at Iowa State University, where as a captain he had a 108-20-1 record. He was a 4 year starter and accumulated a number of Championships, which would include the Sunshine Open, where he was named OW, the Northern Open and Midlands Championships. He was a Big 8 runner-up and twice champion. In the NCAA’s he placed twice, 5th and 3rd. he was a member of a team that was an NCAA runner-up two times and one time a Champion team.

He continued to be involved in wrestling after leaving college, helping coach at Ankeny High School in Iowa, Coach of the Ankeny Wrestling Club, President of the Board of Directors of the Cyclone Wrestling Club and still give clinics and demonstration to athletes in the area that request his help on a voluntary basis.

In 1991, the Ankeny Branch of the YMCA of Greater Des Moines awarded Dave with their Volunteer of the Year award.

In 1994, he was elected to the St. Charles High School Hall of Fame.