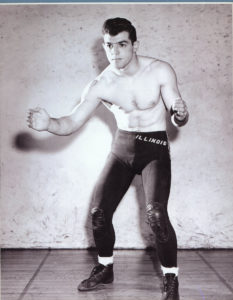 David began his career at Joliet Township High School, where in 1943 he was 3rd in the state. The war canceled the rest of his high school state championship opportunities, but in 1943 he won what was considered the Unofficial State Championship.

His collegiate career began at Indiana University, under Billy Thom, which was interrupted by the call to service in the Armed Forces. When David returned, he entered Illinois University. While at Illinois University he was guided by Hall of Famers Hek Kenney and Newt Law. His achievements were: Big 10 Champion in 1946, National Division One Champion in 1946, Big 10 Champion in 1947, and 4th in the NCAA Divisions One. In 1948, Dave placed high in the Olympic Trails, ending up as the First Alternate on the Olympic Team.