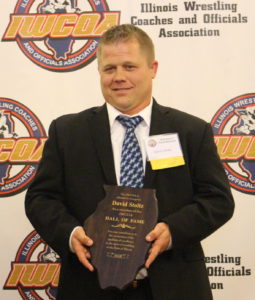 David Stoltz wrestled at John Hersey High School under IWCOA Hall of Fame coach Rick Mann. He was on the A honor roll all 4 years. In 1995 he was crowned state champion. This was followed by a 5th place finish in 96 and a 3rd place finish in 97. David compiled a high school record of 133-9.

While in high school David had a very accomplished Freestyle & Greco career. In 1994, he was the Cadet National Runner up in Freestyle and Greco. In 95, he was the Cadet Greco National Champion in addition to a 3rd place finish in freestyle. In 96, David was a Junior Greco National Champion and he was the Junior Greco National Runner up in 97. David’s accomplishments included being a 3x USA World Team member. Traveling to Hungary and Poland to compete in these tournaments. In 95, David won the Cadet Belt series for accruing the most points in the cadet division. He would share this honor with current Penn State head coach Cael Sanderson. In 97, David won the Dave Schultz High School Excellence Award. This award is given to recipients that show excellence in wrestling, scholastic achievement, character, citizenship, and community service.

David went on to wrestle at the University of Illinois under IWCOA Hall of Fame coaches, Mark Johnson and Jim Heffernan. David was a 2x NCAA Qualifier and he graduated with a degree in Liberal Arts & Science.

After graduation, David owned and managed his own auto detail and body shops for 9 years. He was also an assistant coach at Prospect & Palatine high schools for several years. David currently resides in Fox River Grove with his girlfriend Christie and his son David and he is currently the Director of Operations at Auto Image Plus.