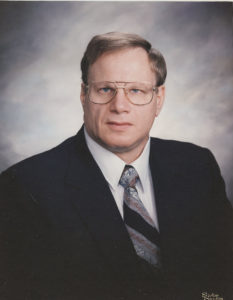 Dick is originally from Dubuque, Iowa where he was an All Stater in Wrestling.

His College days were spent at Dubuque University in Iowa.

His Coaching days began as an assistant at Dubuque Senior High School, then as sophomore coach at Prospect High School here in Illinois. Next was Head Coach at St. Mary’s High School in Sandusky, Ohio. In 1970 he moved to Dakota High School and served 17 years as the Head Coach until retirement in 1987. All told, he has been involved in Wrestling for 42 years.

His Coaching record at Dakota includes 10 Conference Championships; Placed 8 times in the Top 10 in the State Class A Championships, when points were kept and Placed 4th as a Team in the State Duals. He has coached 23 State Qualifiers; 15 State Place winners, which would include 5 State Champions. His dual meet record stands at 314-104-3. Prior to Illinois, his teams won 3 conference championships and had 4 state place winners.

Dick, personally was named to all-conference teams, both in Wrestling and in football while in High School and in College.

He was a Regional Representative to the IHSA 10 times.

He has or was an official in Iowa, Illinois, Ohio and Wisconsin for a number of years.