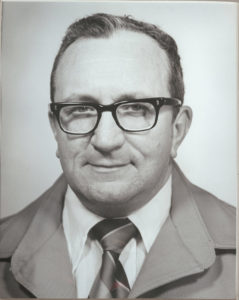 Began the wrestling program at DeKalb High School in 1954, and was instrumental in beginning a highly successful Park District. During his tenure at DeKalb, his teams won 151 duals meets, lost 37, and tied 3. Among their wins were numerous Conference titles, Districts and Sectionals and in 1968 the team won the State Championship. He has 10 State Place winners one of whom was a State Champion. Moving on to Northern Illinois University, Don has continued the building program and in the 9 years on campus, Don’s teams have won 82 and lost 34, with a number of Mid-American Conference Champions and 4 All Americans. Don was Coach of the year in the MAC in 1976. Besides coaching, Don has been active as an official, clinician, and host to Olympic freestyle tryouts.