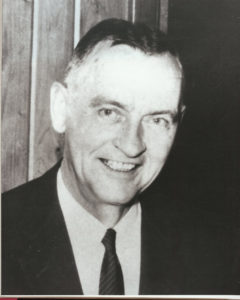 Don began his career at Onarga Military Academy. They did not wrestle competitively, but did so in Gym Classes. After graduation Don went to Illinois University as a Football Player. He played under Coach Zupke.

Graduating from Illinois in the Depression, he went west to begin his coaching career: Sterling Colorado; Scottsbluff, Nebraska; Torrington, Wyoming; Wheatland, Wyoming and finally getting his call to come home to Illinois – to Wheaton. He coached at Wheaton Community High School from 1942 to 1964, retiring completely in 1968. His total career spanned some 35 years. Although he coached many activities, he was most noted for his line coaching in football and for Starting the Wrestling program at Wheaton Central High School, which he did in 1948. At the time he began the program, Wheaton was one of the smallest competing schools in this Northern Suburban area. His opponents out of necessity where the larger Schools. In the years from 1948 until 1964 the growth of schools competing rose from 24 to over 200 and in many cases he was instrumental in helping new schools start their programs. He had a number of state qualifiers during this time with two place winners.

Don spent a considerable amount of time officiating and conducting instruction at various levels when called upon to do so.