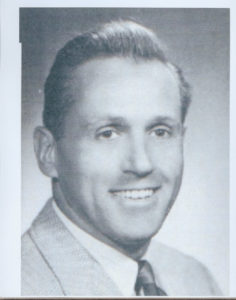 Donald is a graduate of Elgin High School. He did not wrestle in high school. His collegiate days were at the University of Illinois. While there he attended a Officials Wrestling School at Granite City and began officiating in 1942. He competed in football, track and diving, and placed 3rd in the Big 10 in diving. Qualified for NCAA’s in javelin.

He officiated numerous Regionals and Sectionals and at 10 IHSA State Finals, starting in 1943 to 1953.

His teaching-coaching career began at Granite City 1940-43, then to assisted wrestling, football and track. He also became a swimming official during this time and officiated for 15 years. Known as the father of swimming in Will county, served as a referee in swimming at the Olympic Trails in 1972.