Donnie Reynolds wrestled at Providence Catholic High School in New Lenox for IWCOA Hall of Fame member Keith Healy.  Donnie was a three-time Catholic League Champion. He was also a four-time state place-winner, placing 3rd as a freshman, 4th as a sophomore and winning back-to-back titles his junior and senior years.  He was undefeated his senior year and earned USA All-American honors.  He finished his high school career with a 165-9 record.

In 2003 he was Junior National Champion and World Team Member, placing 7th in the Junior World Championships.

After graduation, Donnie attended the University of Illinois in Champaign and wrestled for IWCOA Hall of Fame member Mark Johnson.  During his college career he was a two-time Midlands place-winner, 2-time Big 10 place-winner and two-time NCAA Division I National Tournament qualifier.  During his collegiate career, he helped the Fighting Illini capture the 2005 Big Ten Conference team title.

After college, Donnie began his coaching career at Providence Catholic as an assistant to Keith Healy, where he helped guide the Celtics to a 2nd place finish in the 2008 IHSA Dual Team State Tournament.  He coached for USA Wrestling (Team Illinois) and was a part of the staff who coached more than 25 USA Wrestling age-group National Championships since 2003. 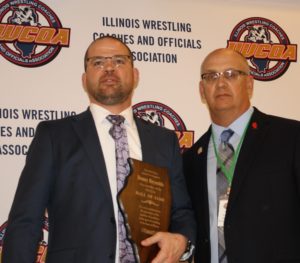